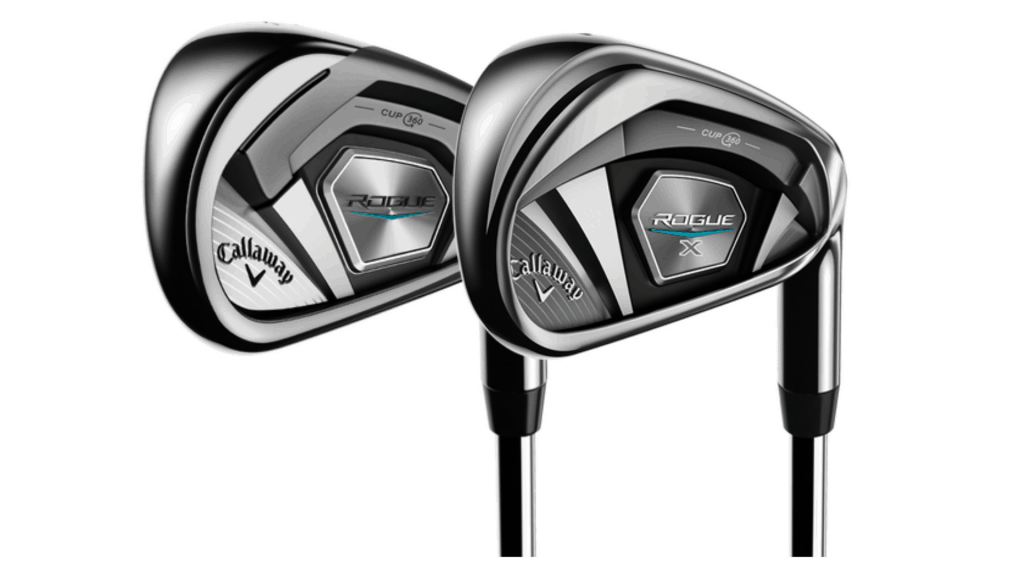 When Callaway put out the XR Irons several years ago they appealed to the mid to high handicap player. The player that wanted an affordable set of irons that made this challenging game quite a bit easier.

There were however some downfalls to the XR Irons.

They weren’t all that long, launch angle was not optimized and feel and sound made them seem a bit clunky through impact.

All that has been changed with the introduction of the Rogue Irons Callaway put out in 2018.

In this Callaway Rogue irons review, we are going to cover the Rogue and Rogue X.

As I’m sure you have picked up on from all the different reviews that we do, ball speed is the name of the game. If you want to hit the ball further then you must increase your ball speed.

Callaway used their traditional VFT (Variable Face Thickness) with the addition of the 360 Face Cup Technology.

Something we could all use in our golf game!

Another advancement in golf club technology has been the discovery of the thin clubface helping to increase ball speed. Callaway made the face as thin as they could on the Rogue, yet when this happens sometimes feel is poor.

Callaway designers were able to combat that issue using urethane microspheres. These act as almost an elastic in the clubhead to provide better sound and feel without affecting weight or performance at impact.

Now let’s review a bit more about the features and benefits of the irons Callaway Rogue put out this year.

Between the two models that are offered, there are quite a few players that would benefit from the irons Callaway rogue. The majority of low handicap golfers are not going to enjoy the feel of these clubs, and they likely won’t need the extra distance.

The perfect player for the Callaway Rogue Irons is the mid to high handicap golfer looking for mid-launch, increased distance and more forgiveness.

Now that the Rogue is no longer being produced by Callaway (it is still readily available) the custom shaft options are not as easy to find. The stock options are perfect for those players that need a standard model.

Callaway has stopped producing the Callaway Rogue Irons to move onto their Apex and Epic series. However, they are still fairly easy to find and at a much lower price point. If you are looking for something with a custom shaft, it’s going to be difficult to come across.

The good news is that the stock options are a perfect match and weight for these Rogue Irons. The Steel Shaft comes in a Regular and Stiff and it is the KBX Max 90.

The Graphite Shaft is the Aldila Synergy coming in a Regular and Stiff in the 60 gram and a Senior/Lite in the 50 Gram.

This type of player improvement iron is never going to have a small or thin clubhead. The performance would just not be the same. That being said this iron does appear quite a bit less clunky than the XR Iron.

With the Rogue X option as you move closer to the 5 and 4 iron, the head starts getting quite a bit bigger in the back. This is to help improve launch and forgiveness.

Considering the lofts are quite a bit lower on these clubs than some others in the market this is necessary to make sure that distance and accuracy are not compromised.

The sound on these can be a bit hollow but the urethane microspheres help to muffle that just a little.

Are they the most pretty irons on the market? Not really, but they are certainly not ugly.

One of the longest on the market today. Some will debate that this has everything to do with the lofts that are adjusted on the clubs.

The 4 iron on the Rogue X is more like a 2 iron. In my opinion it’s gotten a bit extreme. If a player who normally hits a 7 iron 150 puts a Rogue in their hand and hits it 165, all that is happening is they are creating a gap in the bag somewhere else.

Golfers with slower swing speeds who truly struggle to get the distance need to make a par, should seriously consider these Rogue Irons Callaway.

The Rogue X is a bit stronger than the Rogue so keep that in mind, the ball flight and launch will be affected by the strong lofts as well.

The Callaway Rogue Irons are extremely forgiving. The sweet spot on these clubs is just very large thanks to the VFT and FaceCup Technology.

Pricing has come down on these irons making them more affordable.

The key features and technologies available on the Rogue and Rogue X irons are what set these irons apart from other options on the market. Having access to this impressive technology will help players feel as though they have more control over their golf game. Here are the most important features you will find in the Rogue and Rogue X golf irons.

The Rogue golf irons have a wide sole and tremendous ball speed and MOI. This is without a doubt a distance iron that will allow for increased yardage and improved overall performance. Golfers that tend to miss the center of the clubface will also have good luck with the Rogue golf irons.

The tungsten weighting installed in each of the golf irons from Callaway Rogue helps players get higher launch and more control. Tungsten is becoming one of the more premium materials used in golf irons, and you will see more and more golf irons with this technology.

The Urethane Microspheres installed in the Callaway Rogue and Rogue X irons are there to help dampen vibration and increase the feel at impact. When you miss an iron shot slightly, the club will vibrate, and that makes it not feel quite as good at impact. The urethane microspheres will help golfers that want to play with a game improvement iron but still want the club to feel like a player’s golf club.

The Rogue X only comes in one variety with several different shaft options, but there are some different Rogue irons that you should be aware of. The Rogue series of irons from Callaway came with three different options to choose from.

These options were the Rogue Pro, Rogue, and the Rogue X golf irons. Each of these was manufactured for a different player type, and before purchasing, you should understand the differences between these golf irons.

The Callaway Rogue Pro golf irons are designed for golfers that are lower handicap players who need the extra performance they can get from a player’s distance type iron. With the Rogue Pro golf irons, players have more workability and can get a golf iron to do quite a bit more when it comes to accuracy.

Although the Rogue Pro irons are long, they are not nearly as forgiving as the Rogue or Rogue X.

The Rogue irons allow for higher ball flight even though they have lower lofts for the extended distance. The Callaway Rogue irons will appeal to the largest population of golfers.

Callaway Rogue X have even lower lofts than the Callaway Rogue, but the forgiving face and large sweet spot allow for better performance for the higher handicap player. Those that are new to the game or looking for increased forgiveness will enjoy what the Rogue X has to offer.

Here are a few of the most commonly asked questions about the Callaway Rogue and Rogue X golf irons. Having the proper information before making your decision about irons will really help to ensure that you end up with

What does CF 18 mean on Callaway Rogue Irons?

When did Callaway Rogue irons come out?

The Callaway Rogue irons came out in 2018. They are still widely available on the market as they were one of the more popular choices from Callaway, and they have remained on the market to help increase golfers’ access to the clubs.

The Callaway Rogue irons are rebuilt for the mid to high handicap player, and they make an excellent option for those that are looking to work on their golf game. The Rogue irons are forgiving, easy to launch, and can add distance to a golfer’s game.

As you have seen in our review, the Callaway Rogue Irons took the Callaway XR Steelhead and improved on it greatly.

The Callaway Rogue Irons have been one of the best selling sets Callaway has ever put out. They were able to increase distance and forgiveness and still maintain decent sound and feel.

The option for the Rogue or Rogue X has made this club appeal to a wide range of players, the Callaway Rogue Pro Irons did not do quite as well. It provided increased distance, a thinner and smaller head but the players feel was just not there.

Check our guide on the Callaway Rogue Driver by Skilled Golf