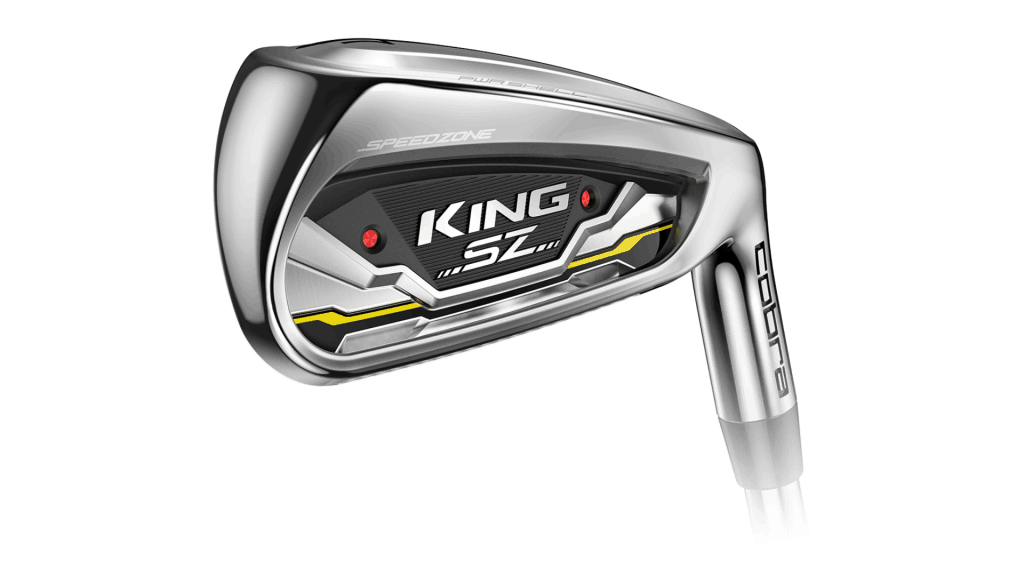 Cobra is not widely known to be a leader when it comes to groundbreaking technology. They have been looked at as the alternative, the other option if you don’t go with Ping, Callaway or TaylorMade.

In the last few years, Cobra has changed that. The F9 released in 2019 was a reliable option that people saw significant improvements with. Not to mention the one length concept that was introduced a few years ago.

In this Cobra King Speedzone Irons review, will talk about Cobra SZ Irons, released in January 2020. These are cavity back irons built for the mid to high handicapper.

The Speedzone is available in the one length option as well, just as the Cobra F9 is. If you are looking for an incredible game improvement iron at a fair to reasonable price, the Speedzone is undoubtedly worth considering.

The Speedzone irons are all about speed. Cobra focused on four different areas to help increase ball speed in this set.

This is a game improvement iron. If you lack ball speed and distance, this is the club for you.

Lower handicap players looking for feel and feedback will not find that with these irons and should consider that when looking at the Cobra King Speedzone irons.

As with all newly released irons, you can order the Cobra King Speedzone irons in just about any graphite or steel shaft option that you might like.

The stock steel option is a standard one from Cobra, the KBS Tour 90 Steel. This KBS Shaft is designed for players looking for high launch and speed.

The Graphite stock shaft is the UST Recoil 460 ESX. If you are looking for a lighter option and increased speed, the Graphite option is the way to go. Loss of feel and control can happen when switching to graphite. Every review on this shaft does mention increased feel and control.

If you cannot find the shaft option that you need because the Cobra irons are a few years old, it is perfectly acceptable to order them and then take them to be custom fitted and retrofitted to your needs as a player.

These irons are thick. If you like a thin-looking iron, the Cobra King Speedzone is not for you. The reasoning behind the thickness is increased stability, higher launch, and some more natural shots out of difficult lies.

A common complaint among cavity back irons, especially ones of this size, is the sound at impact. Manufacturers have done a lot in the last few years to make your hands sting just a little less on that off-center hit.

Cobras’ version of that is called the co mold medallion. The Co Mold Medallion is a small insert featuring aluminum and acrylic foam to help absorb some of the impact and make these feel and sound better.

It does work, but you cannot expect the cobra king speedzone irons to feel like a forged club.

Without making this too complicated, the Cobra King Speedzone iron is the longest iron that Cobra has ever released. Their new PWRShell face helps to increase distance by offering a 35 percent larger sweet spot.

Even when you miss the center on these, you will not see shots landing twenty yards behind.

As we all know, distance is directly related to ball speed and clubhead speed. With these irons, Cobra installed the first-ever carbon fiber topline. This is not just brand new technology for cobra irons but also irons in general.

The carbon fiber saved three grams and led to the Cobra King Speedzone irons having a much lower center of gravity. Every review of these Speedzone irons has them competing with TaylorMade SIM MAX and Callaway Mavrik to the highest level.

Not directly distance-related, but another impressive benefit of the Cobra king Speedzone irons is the Cobra Connect Technology. Cobra released this concept several years ago with the F7 and F8 lines.

A sensor in the grip of your Speedzone irons will track each shot and provide data in the Cobra Connect app on your phone or mobile. For players looking to improve their golf game, the Cobra Connect technology can be a great way to identify your weaknesses in your game.

Our favorite part about the iron app is what Cobra King calls the Arccos Caddie AI. By continually tracking your distance data, you will get an accurate idea of how far you hit each club.

Many mid to high handicap players are guessing about the exact distance that they hit their irons. Cobra King took that away with this technology-enhanced irons set.

In addition to the PWRShell face offering a 35 % larger sweet spot, Cobra also introduced what they call Stability Zone technology.

Simply stated, they worked on the shape of the clubhead to make sure the Cobra King Speedzone irons are much more stable at impact on off-center hits.

This concept is carried over into the Cobra King Speedzone One Length irons as well.

If you are seeking pure forgiveness and consistency in your game, take a look at the One Length Irons Cobra manufacturers as they will make stance and set up the same for every iron shot.

One of my favorite things about Cobra is that they release a set of irons at a fair price and then continue to drop it as the season goes on.

These Cobra King Speedzone were released at an average game improvement price for a 4-PW in the steel shaft. A very fair value for the technology and innovation you will receive.

The SIM MAX Irons by TaylorMade is an excellent alternative to the King Speedzone. The price point is going to be similar, although slightly more expensive.

TaylorMade has been producing irons that have higher ball speeds than almost any other iron on the market for several years.

The SIM MAX irons come in an oversized version that will give even more forgiveness to the players that need it most. The oversized version is a larger, thicker clubhead with a broader sole, but it is quite useful in increasing launch.

The main goal for TaylorMade was to create something that feels as close to a forged iron while offering the maximum amount of forgiveness and distance.

They did create an iron with a slightly better look and feel than the TaylorMade M6 irons released in 2019, although the SIM MAX is very similar to the M6.

Right off the bat, the advantage to the Callaway Iron is going to be the variety of options offered. If the Mavrik is not the perfect fit for you, you have the Mavrik Pro and the Mavrix Max to choose from.

Cobra doesn’t provide this with the Speedzone except for the One Length option.

The Mavrik is going to have a thinner look to them, and without the carbon fiber topline that Cobra King Speedzone has implemented, they will be slightly more substantial.

As we mentioned earlier, although the Speedzone irons are improved from the F9 Speedback, they are still quite thick and substantial.

With the Speedzone, you will again see the forged face insert and the overall unique shape of the golf head. However, with the Radpseed, the new Tuned Rad Weighting will increase the overall performance that a golfer can get with their golf irons. The 10g weight is positioned low and in the toe of the iron for more forgiveness on off-center hits.

The King speedzone irons have quite a few positives associated with their performance and their technology. Let’s take a look at some of the things that help this iron set stand out as one of the best on the market.

Here are a few of the most frequently asked questions that we get about the Cobra King Speedzone irons. Deciding on a new set of golf irons can be a bit decision, and it pays to ask questions first to make sure it is a good fit.

The Cobra Speedzone irons are an excellent fit for high handicappers. Golfers that are concerned with their ability to launch the ball or to get a golf shot with enough ball flight will like what the Cobra Speedzone have to offer.

Cobra Speedzone irons have a large sweet spot and plenty of forgiveness. In addition, these golf clubs come with an impressive technology called Cobra Connect. The Cobra Connect is a specialized grip that has a golf game tracker in the grip. With this in place, you can see how far you are hitting the ball, what your distances should be and how your game is progressing.

Cobra Speedzone clubs are good. They are game improvement irons with a great mix of technology for both new and experienced golfers. The players that seem to benefit the most from the technology found in the Speedzone irons are the mid handicappers.

WIth a Speedzone iron in your hand, it is easy to have confidence and feel that you are ready for your next round of golf. The club is confident inducing and makes a good choice for the average golfer. Sometimes the Cobra brand is looked at as being almost too forgiving, but the Speedzone also has a great feel.

When did Cobra speedzone irons come out?

Overall the Cobra irons are an excellent option for players in the mid to high handicap range.

What is the difference between Cobra F9 and speedzone irons?

The Cobra F9 irons were a great release for the company, but the latest Speedzone irons have faster ball speeds and slightly more impressive technology. If you are new to the game of golf or simply ready to make a major change in the equipment you use, the Speedzone is the way to go.

Essentially the F9 are a bit more outdated than the Speedzone and this is something that golfers should take into consideration.

Cobra iron sales have skyrocketed over the last several years. Working on shaft weighting, club head materials and shapes, and the technology side of the game, they have put themselves into the game.

Hopefully, this Cobra Speedzone irons review left you feeling like you have enough information to decide if the Speedzone is a good fit for your game.