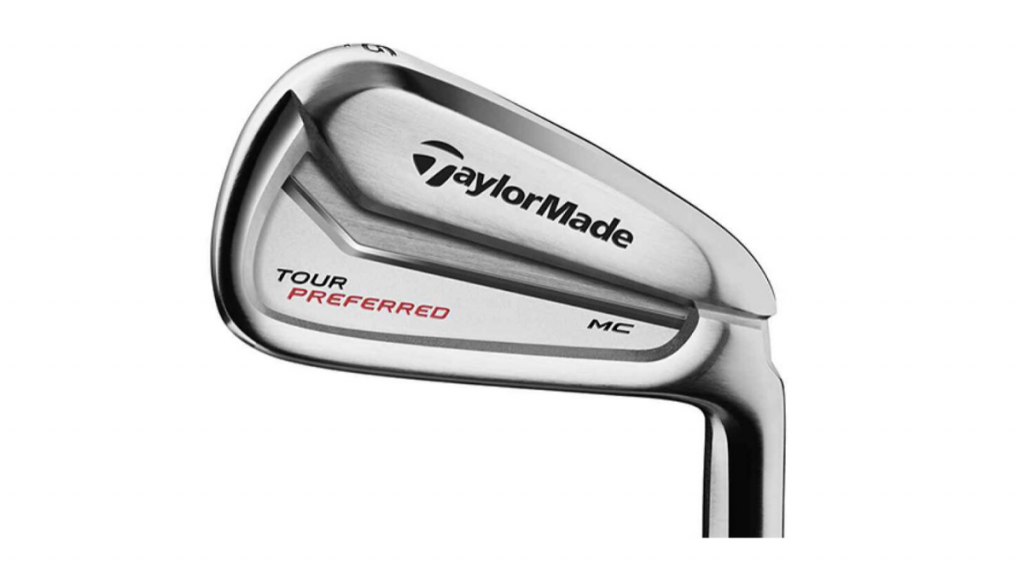 The Taylormade Tour Preferred MC Irons are made to bridge the gap between performance and forgiveness.

It’s a great option for experienced ball strikers who are looking for a high-performance set of irons but still want a bit of forgiveness for those occasional bad hits.

Their hallmark feature is Taylormade’s “Speed Pocket” design on the 3 through 7 irons which allows for faster ball speeds and greater distance.

The MC series falls right in the middle of Taylormade’s Tour Preferred line-up where the MB sits on the expert end and the CB is made for more beginner players.

In this TaylorMade MC Irons review, we will discuss not only the best features of MC irons but also who will benefit from these clubs.

The Tour Preferred MC line is meant to provide quality irons for players looking to move into expert level. It brings packs a powerful performance on centered hits but it also adds some forgiveness to the bad ones.

The thinner soles will give players greater control over their shot while the Speed Pocket design adds forgiveness.

This isn’t an expert level iron set like the Tour Preferred MB but it will give players the support they need to upgrade from more beginner-level sets.

Clubhead size remains larger than the MB and smaller than the CB so would probably be ideal for players with low double digit handicaps. It’s not yet what experts may use but it will help players aiming to get there.

Unlike previous releases of this model, and to accommodate the Speed Pocket design, the 3 iron through 7 irons are cast while only the short irons remain forged.

Some players might not appreciate the difference this makes in the feel and response of the irons, though many users have expressed the difference is minimal in daily use.

While the irons give plenty of feedback without the harshness, some players might need some getting used to the sound and the stiffness of impact. It’s not as soft as other models and can have an artificial ring to it.

The “Speed Pocket” is one of the more prominent and highly marketed new technologies on these irons. It’s a tiny slot cut into the sole of the iron that allows for more flex on impact leading to more springiness. (source)

Players who have used the technology on the green agree the feature will add a few extra yards to their swing and add consistency to longer shots. (source)

It should also be noticeably easier to hit the ball on center with these irons.

Overall, chatter marks and scratches tend to remain low through extended use. To prevent debris from entering the speed pocket and to help quiet vibration, TaylorMade filled it in with a specially formulated polyurethane by 3M. (source)

For some users and on rougher terrain, this may wear over time but it’s unlikely to with regular use.

In their 2014 release, Taylormade took away the precision weighting port that had the irons looking more industrial.

The latest irons come with a clean and minimalistic design throughout, which some will appreciate as an improvement over the previous version.

It’s as though they decided to mute the aesthetic to give it a more classic air and a better look in the bag.

A hand-polished satin nickel-chrome finish gives the irons a professional sheen that looks pretty good in the bag. It’s also probably good it’s a satin finish so you don’t have to worry about getting blinded on sunny days.

HOW DOES IT COMPARE?

If your ball striking ability is high enough that the MC series could be holding you back, you might want to take a look at the all-forged MB line instead.

While it doesn’t feature the “Speed Pocket” technology, its smaller clubface is designed to give more performance and accuracy to your hits.

The AP2 712 is targeted at the same type of player as the MC. You’ll get the same balance between performance and forgiveness and players will appreciate the boost in distance and workability this set has to offer.

The main difference between these and the MCs will be that the entire set comes forged, which may make some difference in the feel and playability.

Without the Speed Pocket feature, the shots may not feel as powerful, but they offer more workability and are meant to help anyone with a low double digit handicap progress to the next level.