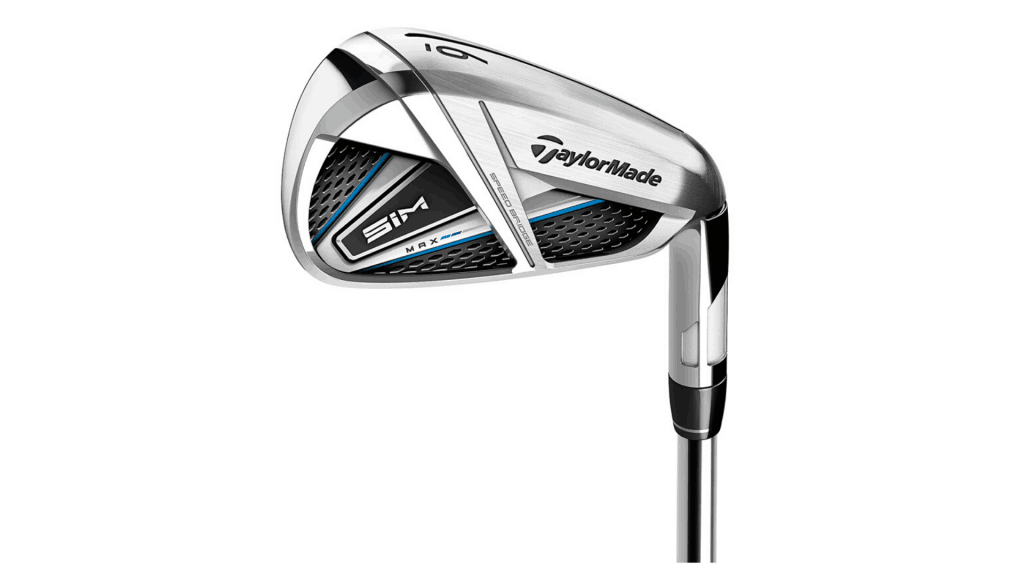 The release of the TaylorMade SIM MAX Irons has been much anticipated among TaylorMade fans and supporters.

The M series was hugely successful for TaylorMade, and you can see many of the same features carried over into the SIM MAX Irons.

The main goal for TaylorMade on these irons was to create something that felt and sounded better than their previous game improvement sets.

Many steps were taken (which we will explain further in this TaylorMade SIM MAX review), but overall the improvements from the M6 to the SIM MAX are noticeable.

The TaylorMade SIM MAX Irons feature an echo damping system to help absorb some of the vibration and sound at impact. The face on this SIM MAX is 17% thinner than previous models leading to explosive distance off the clubface.

In this TaylorMade SIM MAX irons review, we will go through the pros and cons of these brand new clubs and help you decide if this set would be beneficial to your game.

Some of the technology packed into these irons includes SpeedBridge, SpeedPocket, Echo Damping, and Progressive Inverted Cone. These terms can give even the best golfers a headache.

We will break down what each means and how it will affect your golf game.

TaylorMade has a wide range of iron sets to fit all player types. These TaylorMade SIM MAX irons are going to be game improvement irons for the mid to high handicap player.

If you are a brand new golfer, the SIM MAX OS will be an excellent option for you as well. Low handicap players wanting to stay with TaylorMade should look into the P790 Ions or P760 Irons.

The steel shaft option for the TaylorMade SIM MAX Irons is going to be the KBS MAX 85. This is an excellent stock option across several brands. It is a mid-weight, high launch, high spin shaft that will work very well for the majority of golfers.

New shaft for TaylorMade released in 2020 is the Fujikura Ventus Blue Shaft. The Ventus Blue is a lightweight mid-launch, mid-spin shaft for the players that like the feel and distance of a graphite option.

Since TaylorMade is still producing the TaylorMade SIM MAX irons, there are a variety of custom shafts that can also be put in these irons. However, both stock options are great shafts.

Improving the sound and feel was the number one goal for TaylorMade when putting together these SIM MAX irons.

To help with sound, TaylorMade hired a sound engineer to come up with the Echo Damping system. The system quickly counteracts any harsh vibrations at impact.

The TaylorMade SpeedBridge technology also helped to increase stability in the clubhead, which in turn let to forged like feel.

Golfers have always had to choose between the feeling of forged and the performance of a cavity back. TaylorMade is trying to bridge that gap and make this an easier decision.

These new SIM irons look very similar to the M6 iron in many ways. The Speedbridge and Speed Pocket make the design appear very similar. The SIM MAX OS is going to be a little larger with a full sole.

When the SIM Irons were designed with a 17 percent thinner clubface, it was done to increase the jump the ball takes off the face. This thin face combined with the Speedbridge makes the Taylormade SIM MAX Irons some of the longest on the market.

This comes as no surprise considering how long the M6 irons of last year were.

As far as lofts are concerned on these clubs, the SIM MAX OS is going to have lower lofts to help increase distance. The difference in loft varies between 1.5 and 1 degree. The SIM MAX OS is considered a distance iron.

Ball speed is something that TaylorMade does not mess around with when it comes to their irons. If the distance is an issue in your game, the TaylorMade Sim MAX irons will help.

In addition to the overall shape of this iron being extremely forgiving, TaylorMade also introduced the inverted cone technology. The inverted cone is a way of explaining why the four iron has added features for forgiveness than the pitching wedge does.

The long irons are slightly more offset and have a wider sole to help keep ball speed and launch consistent even on the more difficult irons to hit.

The ultra-thin face allowed the center of gravity on the TaylorMade Sim MAX Irons to be very low, promoting high launch.

The release price on the TaylorMade Sim Max Irons is slightly lower in the steel shaft than it is in the graphite.

The pricing is about average for a newly released product, very similar to the Rogue and Speedzone iron sets.

If the SIM MAX options are not the right fit for you, we have put together a few other options for you to review.

Although you could not go wrong with any of these options, the Callaway Mavrik are going to most closely match the SIM MAX and all the technology that they pack in.

Slightly less expensive and just as long as the TaylorMade SIM MAX, you have the option to go with the Cobra Speedzone set.

Although a little thicker than the SIM, the Cobra Speedzone irons are much improved from the F9 Series of last year. Increased feel and distance make these an excellent choice for a game improvement iron.

As we explained in this TaylorMade Sim MAX Irons review, ball speed is the competition that all manufacturers are in. Cobra puts out some impressive numbers to compete with Callaway and Taylormade.

The Mizuno JPX Series is an excellent series of irons available in the Tour, Forged, and Hot Metal.

The Hot Metal would be the most comparable to the SIM irons with its cavity back design but forged like feel.

If, however, you are looking to move away from the cavity back design entirely, the JPX Forged is a great model to do that. It still offers some forgiveness but plenty of distance off the face.

The Mavrik is Callaway’s version of the SIM. The Mavrik will be the closest alternative to the SIM MAX OS and the Mavrik Max, which match closely to the SIM MAX. The similarities and differences with this “MAX” terminology this year are bound to confuse any golfer.

With similar lofts, similar club head sizes, similar shaft options, the Mavrik very closely compares to the SIM set of irons. Where TaylorMade used echo technology, the Mavrik used urethane microspheres to help the feel on these clubs be closer to forged iron.


Buyers Guide: How To Choose A TaylorMade Iron

Now that you have a bit more of an understanding as to the TaylorMade Sim Max irons and what they offer, it’s a good idea to understand how to narrow down the TaylorMade golf irons. The SIM Max is one of the most popular game improvement clubs from TaylorMade, but there are other options on the market.

The club head style depends on the type of golfer you are and what type of club you are looking for. Most of the time, the club head style will be a large club head with a big sweet spot, or something like a blade style club built for more accuracy.

Forged iron is designed to give players a better feel and workability. Cast golf irons are typically more forgiving and allow for a bit more forgiveness. Cast golf irons can get higher launch and sometimes more distance because of the multi material construction.

With forged golf irons, the feel is really great, and TaylorMade claims that their SIM Max and SIM 2 Max lines are both going to have a more forged like feel.

Some of the TaylorMade golf irons are priced considerably higher than others. The more expensive irons are typically the blade style clubs that have quite a bit more precision. Pricing for the TaylorMade golf irons on the market will range from around $700 to more than $2000. Ensure that you stay within your budget; however, purchasing TaylorMade irons typically means you will have all the technology you need for years to come. There is a similar popular Taylormade iron product, the R7, among newer players. Because the Taylormade R7 iron set is an older model, newer players looking for quality irons at a reduced price will find this option very attractive.

We get quite a few questions about the SIM Max golf irons. Understanding if these could be a good fit for your game is a smart idea. Let’s take a look at a few things that could help you decide if this is the right path for you.

The TaylorMade SIM Max golf irons are forgiving. Even if you miss the center of the clubface you are going to be able to get a tremendous amount of distance and high ball flight. Gofers have felt that their misses are much closer to each other than in the past before the SIM Max came to the market.

TaylorMade SIM Max irons are for mid to high handicappers. The higher handicappers enjoy the impressive ball flight and long distance that they can get with this iron in place.

Do any pros use SIM Max Irons?

There are no professional golfers that are currently using the SIM Max irons. The SIM Max irons are more of an average golfer type club, they use a variety of distance enhancing technologies that the lower handicap players are not typically as interested in.

The SIM Max irons are better than the M6 irons. The M6 irons were great at the time, but since then, TaylorMade has figured out how to give players more distance while increasing feel. If you want to feel as though you are hitting with a premium golf iron, but you need the forgiveness,, a SIM Max is a great choice.

Last year we saw manufacturers compete for ball speed and distances. Now that they have all learned how to lower the center of gravity, increase launch and make clubs generally easier to hit, they are not looking for feel and sound.

There is only a certain number of players that will accept a thud sound even if the ball is flying for miles.

With the SIM MAX and SIM MAX OS irons, TaylorMade did a great job of addressing the concerns with the M6 and putting out a set that all players searching for game improvement clubs should seriously consider.